Contestation of divisive politics in Lebanon and Bosnia: Comparative thoughts 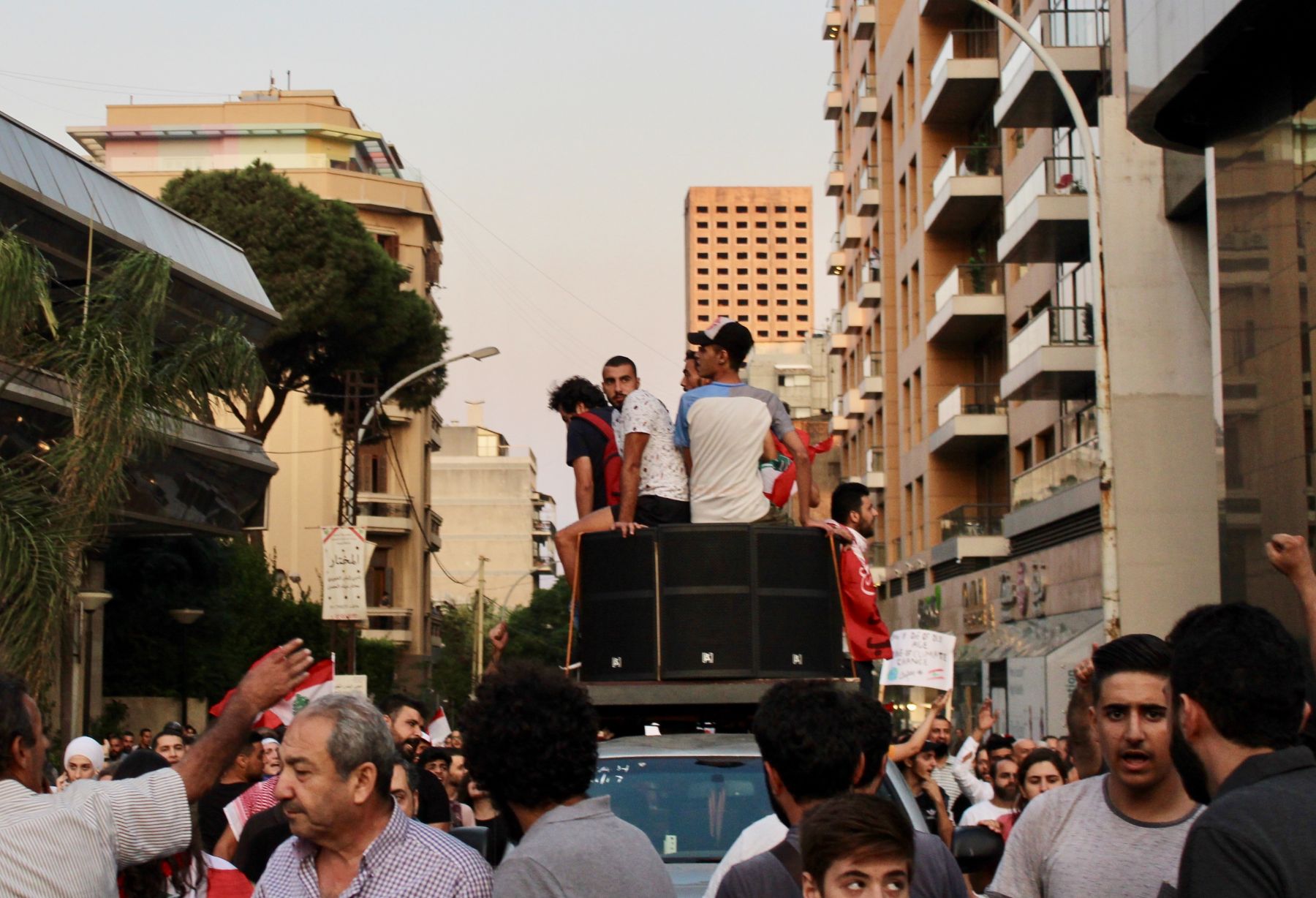 At the time of writing, a wave of protests is sweeping across Lebanon. The government’s announcement of a plan to impose a tax on WhatsApp appeared to be the final straw for the Lebanese, who have been dealing with months of economic austerity, years of severe corruption and a continuous lack of basic services such as electricity and water. The past days, hundreds of thousands of citizens from different sects have taken to the streets against the country’s ruling elites, who manipulate sectarian divides to stay in power.

The protests are the latest - and by far the largest - event in a series of previous  contestations against the sectarian elites in Lebanon, which started about a decade ago. In recent years, Lebanon has witnessed the rise of a plurality of groups and organizations, which have challenged the ruling class and sought to promote new political communities, that transcend sectarian boundaries. The country has also seen several large mobilizations that have united the Lebanese around a series of economic and social demand. The most well-known example is the 2015 protests, where a garbage crisis led tens of thousands to take to the streets. Besides the protests, several new political movements have offered an electoral alternative to the sect-based parties. Most recently, a coalition called, Kullouna Watani (We Are the Nation), ran in the 2018 national elections.

Recently, the SEPAD project has facilitated a number of reflections about the potential ways in which sect-based identities can be de-politicized[1]. This has also opened up for a demand for more comparative research on challenges to divisive politics across countries and regions. The contestation of Lebanon’s ruling elites has often been compared to contention against sectarian leaders in other Arab countries, especially Iraq (Salloukh, 2019; Yahya, 2017). However, we can also find interesting comparisons outside the Middle East.

An obvious comparison is Bosnia-Herzegovina. Here, political and social life is fundamentally divided along ethno-nationalist lines, and the main parties mobilize supporters, using a discourse of ethnic fear and distrust. Over the last decade, Bosnian has, like Lebanon, witnessed the emergence of a new form of challengers to the country’s ethno-nationalist elites (Wimmen, 2018). The largest popular mobilization took place in 2014, where a workers’ demonstration in the industrial city of Tuzla, turned into countrywide protests, demanding a series of socio-economic changes. A main slogan in these protests sounded, “we are hungry in three languages”. With this slogan, the protesters deliberately stressed the solidarity between the country’s three main ethnic groups: the Bosniak Muslims, the Orthodox Serbs and the Catholic Croats, who speak in three different dialects (Murtagh, 2016).

Lebanon and Bosnia have been compared on many aspects, including their political institutions (Bieber, 2000). The two countries are both examples of post-war societies with so-called corporate consociationalism, in which the political representation of sects or ethnic groups is constitutionally entrenched (McCulloch, 2014). So far, however, there have been no in-depth comparisons of the oppositions to divisive politics in the two countries.

Over the past months of my PhD research, I have taken the first steps towards such a comparison and explored, whether there are similarities to be found between Lebanon and Bosnia. It might be that new opposition forces to divisive politics have emerged almost simultaneously in the two countries, but to which degree are these oppositions similar? Do they mobilize around the same grievances? And do they have the same constituents? From my preliminary research, I have pinpointed two interesting similarities. The first similarity lies in the substantial internal differences between actors, who contest divisive politics in the two countries. The second one lies in the challenges these actors face in mobilize support outside the urban middle class.

One common enemy but multiple visions

Challengers to divisive politics in Lebanon and Bosnia are often described as a social movement or an oppositional force(Cambanis, 2017; Mujkić, 2015). This may lead us to imagine them as a collective actor with a shared identity and a shared set of goals.

When I started doing field research in Lebanon back in 2018, I was surprised by the amount of differences and internal disagreement between the groups and activists that defined themselves in opposition to sectarianism. The more interviews I did, the more I discovered how salient these differences were. I learned that different groups of activists often had heated discussions, and even conflicts, about how to best counter sectarianism and what to replace the sectarian system with. In the 2015 garbage protests, for example, disagreements between activists sometimes impeded coordination between them.

When I visited Bosnia in August this year, I realized that activists and groups, who sought to challenge the country’s ethno-nationalist elites also disagreed substantially, both in ideological stance and strategic approach. Several of my interviewees told me that there was a lack of trust between formal civil society organizations, which seek to break the country’s divides through donor-funded programs, and the movements, which consist of independent activists, fighting against the political leaderships. Where civil society believe it is possible to change the system from within, many activists believe the only way to counter ethno-nationalism is to disengage completely from established political actors and civil society organizations. This was clear during the 2014 protests, where the demonstrators refused to form alliances with any NGO or political party that sympathized with their goals.

In both Lebanon and Bosnia, we see that grievances against sectarian or ethno-nationalist leaders can translate into a myriad of different political visions and counterstrategies. The existence of a common enemy in the political elites does not automatically foster collaboration.

The current protests in Lebanon reveal that there is a widespread dissatisfaction with the political elites, and that it is possible to unite large numbers of citizens from across classes and regions around this dissatisfaction. The same is evident from the largest anti-establishment protests in Bosnia. However, turning dissatisfaction against the political elites into a lasting, organized opposition, is a harder exercise. In fact, the difficulties of creating a cross-class movement is considered one of the major obstacles to overcoming divisive politics both in Lebanon and Bosnia (Cammett, 2019; Mujkić, 2015)

The majority of Lebanese and Bosnians, who have taken to the streets against their leaders over the past years, still vote for them. In the 2018 national elections in Lebanon, for example, the Kullouna Watani coalition, which presented an alternative to the sectarian parties, won only a single seat in the parliament. In Bosnia, the party, Nasa Stranka (Our Party), which opposes ethno-nationalist politics is struggling to attract voters outside the capital of Sarajevo. Generally, citizens who organize against the political elites on a more sustained basis are often from well-educated, urban, upper middle-class backgrounds. When I did fieldwork in Bosnia back in August, for instance, I would often hear that resistance to ethno-nationalist politicians only comes from a small, politically conscious segment, which amounts to around five percent of the country’s population.

A main reason for this is that social security in Lebanon and Bosnia is largely provided through clientelist networks (Cammett & Issar, 2010). Consequently, many poor and lower middle-class citizens rely on their political patrons to get access to jobs, health care and scholarships to their children. By standing up against these leaders, they fear to put their social welfare at risk.

Paving the way for a comparative knowledge

To sum up, there are interesting parallels to draw between Lebanon’s and Bosnia’s challengers to divisive politics. However, a broad range of questions are still left open. While it seems that these challengers are highly different, we do not yet know, if they are different in the same way. Furthermore, it remains to be explored how they tackle the challenge of mobilizing beyond the urban middle class. Would a mobilization of workers look similar in Lebanon and Bosnia, for example? Finally, it is also relevant to ask, what broader lessons we can draw from comparing Lebanon and Bosnia. Can the Lebanese and Bosnian cases teach us about resistance to divisive politics in societies such as Bahrain and Syria, where the divisive politics is exercised by a single authoritarian regime? The SEPAD project will provide a forum for exploring these questions over the coming years.

Salloukh, B. F. (2019). Here’s what the protests in Lebanon and Iraq are really about.The Washington Post.

Yahya, M. (2017). The summer of our discontent: Sects and citizens in Lebanon and Iraq: Carnegie Endowment for International Peace.

[1]Amongst others, Morten Valbjørn and Simon Mabon have written - and presented - papers reflecting on the theoretical, conceptual and methodological aspects of de-sectarianization which will feature as part of a special issue of the Review of Faith and International Affairs.