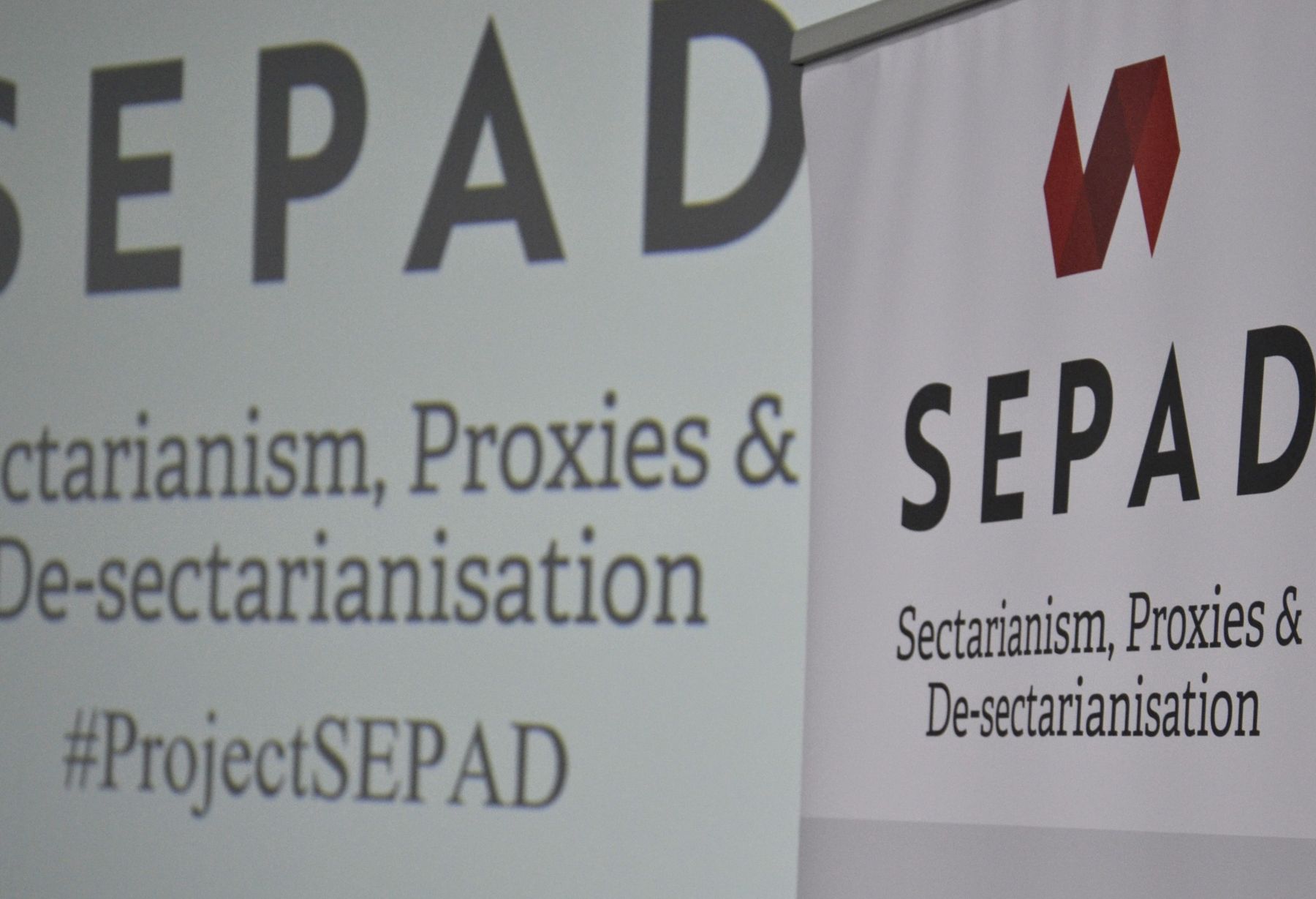 On the 10th September, SEPAD held an event discussing de-sectarianization and the contemporary Middle East in collaboration with the Foreign Policy Centre at The Work Foundation in London. Over the course of the day, SEPAD fellows embarked on a rigorous exploration of de-sectarianization, reflecting on conceptual understandings, categorisations, methodological questions and processes, spanning  Iraq, Lebanon and Bahrain. Drawing on expertise from Politics, International Relations, Criminology, Law, Anthropology and Political Theory - all applied to the Middle East - the workshop facilitated a greater awareness of the complexities involved in re-imagining the role of sect-based identities in political projects.

Drawing on the idea of de-sectarianization as an ‘umbrella term’ for the contestation of sectarian identities, the contributors offered rich analytical and empirical observations of anti/cross/trans/post/de sectarianism as categories to understand the myriad different manifestations of de-sectarianization and the areas in which this contestation occurs. Processes of re-imagining occur at the ‘intimately tiny’ level of local politics and also at the regional level, including top down efforts to regulate life. These efforts are shaped by the subtleties of context specific contingencies, differing across time and space as a consequence of different structural factors that shape agency and a range of different experiences that condition the ability of actors to operate. The forces that condition agency cross different levels of analysis, bringing together domestic, regional and international factors.

In spite of this, there are a number of different strategies deployed by actors engaged in de-sectarianization. These include: all that we share, which articulates unity across communal groups; alternative cleavages, which reframe debates about sectarian difference along different lines such as good and bad, people and regime; and cooperating across sects, which aims at promoting a more banal form of sectarianism, facilitating collaboration across communal differences. Beyond this, questions remain about the processes and methodologies deployed by these groups, which can have implications for the success of such efforts. After this initial panel reflecting on the theoretical, conceptual and methodological issues, the remainder of the day was spent reflecting on case studies (Bahrain, Iraq and Lebanon) with rich, insightful discussion from a range of disciplinary backgrounds.

This productive interaction between different disciplines was most evident in the discussions on sectarianism in Bahrain from criminal justice and anthropological perspectives. Through tracing the historical interaction between the British colonialization and the state-building process led by the Al-Khalifa family that took place during the second and the third decades of the 20th century, manipulation of identities by the state is evident. Data collected from governmental archives and other recourses reveal a systemic-sectarian criminal conduct practiced by the state in Bahrain with devastating repercussions for Shi’a groups across the archipelago. To understand contemporary relations between ruling family and Shi’a groups, it is increasingly important to trace the history of the judicial system and tribal politics in shaping inter-generational grievances. In contrast, anthropological studies reveal a great deal about contemporary life in Bahrain. Personal accounts and testimonies shift dramatically in a sectarianized environment whereby cleavages are activated, which resulted in a loss of various commonalties like friendships, family ties (intermarriages), and national cohesion in Bahrain.

Discussions about Iraq revolved around identifying and categorising the country’s political pathways post the 2003 US-led invasion. By utilising Political Sociology, specifically Pierre Bourdieu’s conceptual framework of capital and political fields, it becomes apparent that sectarian identities had a prominent role in shaping Iraq’s political landscape. Through examining the political process (Muhasasa Ta’ifia) that is based on sectarian identifications and divisions of political posts, appointments, and representations, we can assess the dominance of sectarian narratives in Iraq post-2003. However, there are increasing reflections about the triumph of sectarianism as the chief political identity in Iraq, with domestic and regional factors playing an integral role. Such views recognize the role sectarianism played in Iraq post-2003, although it maintains that the country’s political process operated through the interaction of different forces. Supporting such a position, one can see the increasing contestation of the role of sect-based identities across the Iraqi state. Domestically, since 2014, new political alliances that appear to go beyond sectarian lines were formed, demonstrating the increasing importance of interests over identities in the political field in Iraq which was clearly noticed in the 2018 election. Regionally, Iraq is moving towards a centred approach that is based on rationality and promoting the national interest instead of a sectarian-orientated foreign policy that dominated the country’s regional positions, especially during Al-Maliki’s rule.

In Lebanon, where sectarianism was the main component on which the country’s political life was formed since the implementation of the National Pact of 1943 which determined a sect-based division of power and capital, social and economic developments are playing an important role in challenging or upholding the current system. During elections, civil society organisations played a key role in contesting the sectarian organisation of political life, conditioned by socio-economic structural forces. Yet the traditional manipulation of capital and power by the country’s dominant political, social and economic elites – which are mapped onto the sectarian organisation of life – means that such contestation is increasingly problematic. These elites are able to easily navigate contestation from civil society organisations, drawing on the “political economy of sectarianism” and the manipulation of structural forces. Perhaps the best example of this is an on-going
gerrymandering of provinces to address suit ever-changing sectarian divisions which are increasingly important due to their role in facilitating neopatrimonialism and elite dominance.

A key feature of sectarianism and de-sectarianization are constitutional arrangements and the processes that establish such documents. Constitutions are held as the most important documents that regulate the law and politics of nations. Constitutions in the region lack two significant components: constitutional enforcement and constitutional identity. This comes as a manifestation of a flawed writing process that overlooked necessary aspects including power-sharing, identity, and participation. It is increasingly important to acknowledge these factors in divided societies and top down de-sectarianization efforts that move towards a more inclusive form of political life.

A key theme of the event was the predominance of structural forces in shaping the possibility of de-sectarianization. Yet these structures are conditioned by context specific contingencies, meaning that processes differ across space and time. Processes of de-sectarianization can be both top down and bottom up, reflecting the multiple agendas at play in the re-imagining of political life. As a consequence, there are a range of different ways in which de-sectarianizationde-sectarianization can manifest, shaped by a range of often parabolic forces which coalesce as individuals seek to re-imagine the role of identities in contemporary political life. Full papers will be published in the Review of Faith and International Affairs in early 2020.

The following day, the LSE Middle East Centre hosted an event titled Sectarianism over the Longue Dureé, featuring Bassel Salloukh, Toby Dodge, Staci Strobl and Simon Mabon reflecting on the position of sectarian identities within the fabric of political life and state building processes. SEPAD would like to especially  thank Toby and all at the LSE Middle East Centre for hosting the event. We would also like to thank the staff at The Foreign Policy Centre for their involvement on the 10th, and Carnegie Corporation for their on-going support which has made all of this work possible.