This is a paper about space-making practices in divided cities. I approach this topic from a Lefebvrian perspective, which means that I am interested in exploring how creative interventions in the urban environment - such as graffiti art and murals - are key in (re)imagining cities from the grassroots. Specifically, I discuss how grassroots activist groups use art as a tool to re-appropriate time and re-build space (Lefebvre 2000) to challenge ethno-national divisions and agendas. Overall, this paper contributes to much broader conversations about how to represent divided cities. Echoing other scholars working in divided societies such as Nagle (2016), I argue for the importance of looking at grassroots organising to explore the contributions of supra-national and anti-sectarian movements to peace.

This paper draws on experience gathered through collaborative projects developed with grassroots activists in Mostar, Bosnia-Herzegovina, over the past decade. I have written extensively on the activities promoted by Abart, a platform for urban research and art production in Mostar where I worked from 2009 to 2011 (Carabelli 2018). In this paper, I discuss another example from Mostar; The Street Art Festival. This annual event started in 2012 to become a yearly appointment for citizens, tourists, and street artists from the region and beyond. I ask, what lessons can be learnt from grassroots attempts to change the status quo creatively? How can we write about ‘divided cities’ in a more complex fashion that situates grassroots struggles for social change in a more visible light? How does art, as a space-making tool, attest for these counter-practices?

Nostalgically remembered as one of the most ‘mixed’ cities of Yugoslavia, Mostar became an ethnically ‘divided city’ in the 1990s following the violent dismantling of the Socialist Federal Republic of Yugoslavia. The city was formally partitioned between two antagonistic ethno-national communities – Croat and Bosniak – in order to bring hostilities to an end. In 2004, the city’s administration was forcefully re-united by outside actors (international peace building agencies headed by the European Union) adopting a power-sharing system, which has, so far, performed quite poorly in terms of facilitating inter-ethnic political dialogue and cooperation. To give an example, the city of Mostar has not been able to elect a mayor since 2008. Yet, whereas the political elites seem unable to collaborate, within grassroots activist circles, supra-ethnic collaborative efforts seem to be more successful (Carabelli, Djurasovic and Summa 2019).

The Street Art Festival started in 2012 surely energised by the enthusiasm of other art-production projects such as those led by Abart from 2008 to 2011. The initial idea was simple: to re-fashion existing (and abundant) ruins in a creative way. The aim was to uplift (if you wish) urban aesthetics but also to stimulate conversations about the future of the city and the material legacy of the conflict. The initiator of the project, Marina Djapić, had long been a key figure of the local cultural scene. Marina is very vocal about the need to “move forward”. She strongly believes that young people, like herself, have been robbed by the possibility of being who they wish to become because of the polarising and divisive politics of Mostar. In other words, she advocates for art and culture to be used as means to create a different space that is not ruled by existing and predominant divisions.

Since the end of the war, the city has seen the multiplication of monuments and plates commemorating and celebrating (often controversial) war heroes. As we know, the very practice of inscribing history in the infrastructure of the city is a very powerful means to re-orient urban narratives and cementing processes of identity-making that remains conflictual (Palmberger 2012). As such, the idea to use art to re-appropriate the city becomes the opportunity to tell a different story of what Mostar is and could become. I am aware that murals have been also used to reinforce antagonistic identities in divided city, Belfast being an excellent example. So, I am not arguing that all creative interventions in cities become means to challenge divisions. Rather, I want to think about the tools available to grassroots activists and I want to point to how art practice has been embraced for its powerful potential to re-appropriate space and make visible political claims that find no space in existing political arenas.

Ruins are surely abundant in Mostar. Whereas the western side of the city has been largely reconstructed, the central and eastern areas bear the sign of a pervasive destruction. There are several reasons for the existence of these ruins but they are mostly the result of property disputes or lack of funding for large repair projects. The creative committee of the Street Art Festival chose a number of abandoned ruins in the central area along with rebuilt infrastructures volunteered by landlords. A number of street artists –local and international – were invited to propose ideas and concepts to (quite literally) re-envision Mostar’s urban infrastructures. For the past seven years the Festival has brought together artists from many countries including other contested states to work on the very grassroots project of re-imagining Mostar from its walls. The art works display various degrees of political engagement from calls to inclusion, equality, peace, and reconciliation to unity and solidarity (Photo 1, 2, 3). More and more private landlords approach the creative team asking for their building to be considered and art works have now spread from the central zone east- and westwards creating new paths that surely support – at least visually – the reunification of the city. 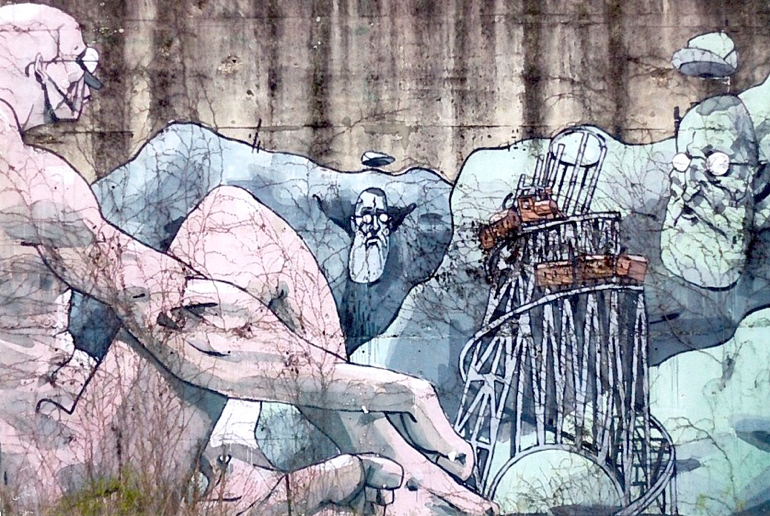 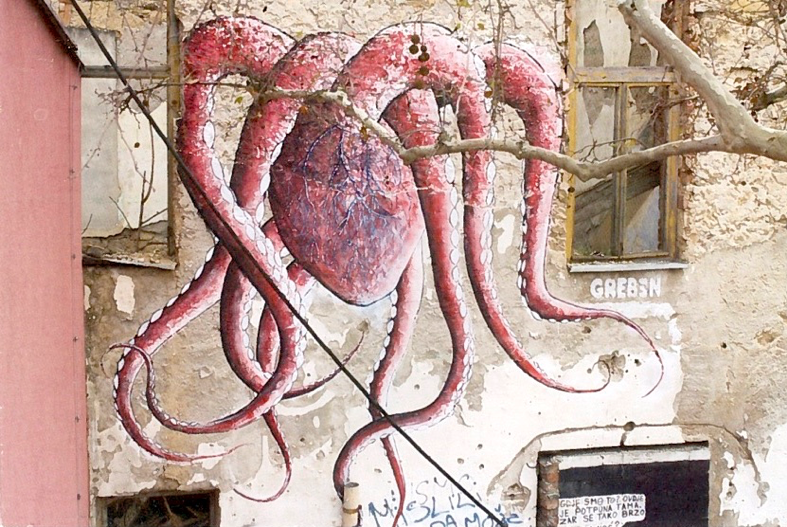 The Street Art Festival invites us to reflect further on crucial questions about the relationship between space, culture and social change. Inspired by the work of Henri Lefebvre, my approach to divided cities is spatial because it is in space – the making and re-making of urban space – that cities change, shape, and thus channel political aspirations that translate (or contest) visions of the future. Drawing on Lefebvre’s theory of the production of space, my interest lays in understanding how urban space is produced as divided and whether this process could be challenged. I am indeed interested in how space is imagined, designed, and built at the level of political administration but, in this paper, I wish to focus mostly on how the city is re-appropriated, experienced, and lived through art. In doing so, I want to explore the conjuncture and disjuncture between the actual (what the city is), the planned (the ways in which contested cities are planned to remain largely segregated) and the possible (what grassroots groups can develop independently from state-plans).

I start with Lefebvre’s call to multiply the readings of the city as a means to challenge normalised (and normalising) urban representations, and in so doing, forge radical strategies for promoting social change and justice (Lefebvre 2000). Surely the issue of representation is crucial when approaching the study of ‘divided cities’ given their tendency to be portrayed as places of absolute violence, segregation, and intolerant group behaviour, leaving little or no space for imagining them as other-than-divided (in the present and in the future). Lefebvre argues that the ways in which cities are represented is itself a productive practice (1991, 40-46).  The representation of a city conveys the essence of an ‘urban reality’ that is adequate to a particular class project. Yet, being an abstract construct, this representation is also a simplification of urban dynamics, in so far as they remain silent on the complex – and yet inconsistent and largely unpredictable - realities of everyday life.

Representations are programmatic in the sense that they facilitate a specific understanding of what the city is meant to be, and to become in the future. In this sense, representations support the idea that the present (and future) is plannable (and predictable). For Lefebvre, these representations play a crucial part in how we get to know a city because they shape our imaginaries and expectations, as well as limit the very possibility to conceive change (Lefebvre 1991, 48-53). In fact, urban representations become normalised and, as such, are rarely challenged. This is how much scholarship on divided cities is shaped by the ‘facts’ of division and focuses less on the often imperceptible (though no less real) dynamics of social change or resistance to such representations. In contrast, Lefebvre’s theory of space production provokes a confrontation with the ways in which cities are mapped and represented (in abstract terms) by focusing on the contingent and contradictory practices embedded in the everyday. In fact, it is by living in cities that people not only make sense of the built environment, but decide how to use it and, often, re-appropriate these infrastructures to counter imposed ideologies and norms as in the case study I am presenting. In other words, it is only by looking at the interplay of urban design, political discourses, and everyday/grassroots movements within the city that a more complex rendering of urban dynamics becomes possible. Such an approach is also conducive to capturing the emergence of actors and movements that rebel against existing urban directives (often imposed without the consent of the citizens) to produce alternatives ways of living and using the city. In particular, I highlight Lefebvre’s claim for creativity and art in imagining and producing possibilities for revolutionary trajectories to shape the future as means to locate struggles for justice in the contested city.

In this short intervention, I wanted to give a sense of how art projects re-appropriate and re-make space challenging the divisive logics of the ethnically divided city. Projects like The Street Art Festival have flourished in Mostar since the end of the conflict. Some run with little or no budget, others were sponsored by international funding bodies within their peace and reconciliation agendas. It is difficult to assess the impact of these projects in divided cities. Surely we cannot measure how much such initiatives support processes of reconciling ethnically divided cities. Yet, and as a way of conclusion, I want to bring the attention on two interrelated points. Firstly, initiatives such as the one outlined in this paper becomes crucial for individuals who sit uncomfortably in the divided city. I refer to those who don’t subscribe to ethnic politics and those who proactively fight against ethnic polarisation and divisions. Secondly, the very act of re-appropriating walls (or ruins, in this case) and paint political messages is a different way of doing politics. It starts with the act of producing a new platform where dissent could be voiced and it continues by taking over more and more space in the city to prove that the future needs to be negotiated beyond party politics.

Carabelli, G. (2018) The divided city and the grassroots. The (un)making of ethnicity in Mostar. Palgrave.

Palmberger, M. (2012). Renaming of public space: A policy of exclusion in Bosnia and Herzegovina’. Goettingen: Max Planck Institute for the Study of Religious and Ethnic Diversity Working Paper 12(02).