Reflections on the Palestinian Identity 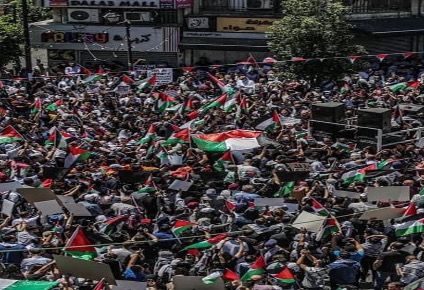 For the first time since I was seven years old I felt again this sense of shared Palestinian identity. On the 18th of May 2021, Palestinians –- regardless of their attributed status as given to them by Israel – i.e. the West Bank, the Gaza Strip, East Jerusalem and those inside of Israel (often referred to as the ‘1948 Palestinians’) – stood shoulder to shoulder in a national strike to demonstrate their refusal to live under Israeli occupation and its 73-year project of annexation and apartheid.

The town squares were filled with young families, students, the staunch supporters of both Hamas and Fatah, conservatives, socialists and liberal secularists; all of whom were holding Palestinian flags and articulating their sense of what it means to be Palestinian.

My only previous memory of such collective Palestinian solidarity came in 1995 when my father put me on his shoulder and took me to see President Arafat’s historic visit to my own city, Tulkrem, a quiet northern city in West Bank. Arafat and the national leadership returned to Palestine and we swung behind an effort to work together to build an independent Palestinian state.

This was one of the most exciting events in Tulkarem’s recent history and for a child, particularly unforgettable (seen in the image below). The sense of solidarity, the collective feeling of pride and the Palestinian keffiyeh that everybody was wearing all combined to make me realize that being Palestinian means something beyond political and religious tribalisms.

This current uprising, triggered not by the planned machinations of political parties but largely by youth who simply want to exist without the fear and uncertainty caused by Israel’s inexorable and ever-extending cleansing policies, has captured again the heart of the liberation movement. Youthful voices have supplanted the voices of tired leaders and given life to what had seemed to be a decaying liberation movement.

Since the Oslo accords of the mid-1990s, the international agreements that set the framework for future policies in the region, Palestinians have been subjected to a process of geographical division. Initially, the Accords made official the different disparate groups of Palestinians in the region, creating a hierarchy between those that live in Gaza, the West Bank, Jerusalem and those ‘officially’ living in Israel.

Then, following the Second intifada in 2000-2002, the ‘Road Map agreement’ was imposed by the international community. This Agreement weakened Palestine’s unifying figure head President Arafat by forcing upon Palestine the position of a Prime Minister (causing political strife and instability domestically). This agreement also helped established the myth of a ‘two-state solution’ which has allowed Israel to veil its annexation and settler policies with a veneer of validity. All these agreements also encouraged the neo-liberalization of the Palestinian economy, causing significant income disparity throughout the Palestinian region that had previously been a fairly equal society.

These factors, in combination with the 2006 elections which saw West Bank and Gaza split across political lines, has atomized Palestinian unification and castrated the momentum of the liberation movement. Whilst once a united front striving towards self-determination, after the Oslo accords the Palestinians have been divided between the haves and the have nots, Fatah and Hamas, the West Bank and Gaza, political elites and olive growers and, perhaps most significantly, between ‘idealists’ and ‘pragmatists’ in the face of Israel’s unrelenting project of aggressive expansion.

These divisions, imposed on Palestine by foreign forces, have been challenged in the wake of the latest conflict. Indeed, as a constitutional lawyer, I believe this current uprising provides the opportunity to reclaim the notion of “We the People.”  In the past political elites have claimed to speak for the people while actually excluding them from government. Since the 2007 Fatah-Hamas clash there has been a decade and a half of division and political sectarianism-Whilst Israel has looked on gleefully, picking up the pieces (sometimes literally) left behind by the losers in these political conflicts.

The Palestinian elections, now indefinitely postponed due to Israel restrictions on ballots in East Jerusalem, were also being seemingly co-opted by these same political elites. Their decision to place restrictive age limitations (28) and financial constraints ($20,000) on those who could run for office suggest an attempt to maintain the status quo – a status quo which is not preventing Israel from its expansion policies.

However, since the recent weeks of bombing, rockets, and ruin, the notion of We the people is beginning to gain traction once again among the people of Palestine. This unity is not pasted without punishment from Israel; after the ceasefire, Israel has kept its ethnic cleansing policy in the neighborhoods of Sheikh Jarrah, and Silwan in Jerusalem. In addition, through emergency laws, Israeli police used legal coverage to justify arresting 500 of the activists from 'the 1948 Palestinians' who lead the national strike and participated in protests.

This moment of shared solidarity suggests that the lines of division drawn by Israel are now falling apart. Indeed, the struggle against this practice of silencing Palestinians by isolating them in various and differently named enclaves is the most vital form of resistance today. For it is through solidarity that a Palestinian identity can be articulated more distinctly. And although identity is a sentiment which is diffuse and slippery, it is also immensely powerful in the face of a religious ethno-state intent on wiping out not only all notions of Palestinian culture but also - through the rise of vigilante groups - those it considers to be ‘Israeli Arabs’.

Similar to my generation who were born in the first Uprising (Intifada), this identity-based resistance began with education. My generation, for example, was only taught the history of other nations at school. To learn about Palestine, the Palestinian map and indigenous place names, teachers had to allocate extra classes and time to provide this crucial information. Thus, for decades’ Palestinian children have had to read what others say or write about them - this is not for want of a voice but rather a need for platforms so their voices can be heard.  Today’s generation, through the rise of social media, their participation in grassroots movements and civil society campaigns, has an acute awareness of Palestinian geopolitics and the capacity to interact with the world on their own terms. This current uprising, fuelled by the younger generation, has reminded the world and to the people of Palestine, that Palestinians can tell their own stories; that they do have their own identity and it is one which cannot be erased.

This new generation’s notion of Palestinian identity can only grow in face of Israeli aggression as the feeling of loss has become a crucial aspect of this identity. The shared struggle and unstable political history have created a long-lasting sense of belonging towards a distinct homeland. Part of it relates to a mix of identity between what you are and what you should give back to your community, and part of it is profound empathy with other’s suffering. It imbrued with a love for life and the respect of others people faith. It is infused not with shrill slogans but with a dry—and defiant—sense of humor.  Palestinian identity is not based on religion as much as it is based on shared habits and values. For example Palestinians whatever their religion will eat Kanafeh  in their celebrations.  To be Palestinian blends history, politics, culture, language and pain. Such a mixture allows generations (the elderly of the “post-Nakba” generation; the middle-aged “first intifada generation,” and so on) to enrich each other but also mark the periods they lived under and what each period means to their shared history. Through such connection bonds can be forged that resist easy description. This sense of solidarity will not lack political power today or tomorrow. When conditions are ripe it can, and should, translate into constitutional arrangements that will affirm the political reality that is the State of Palestine at some point.