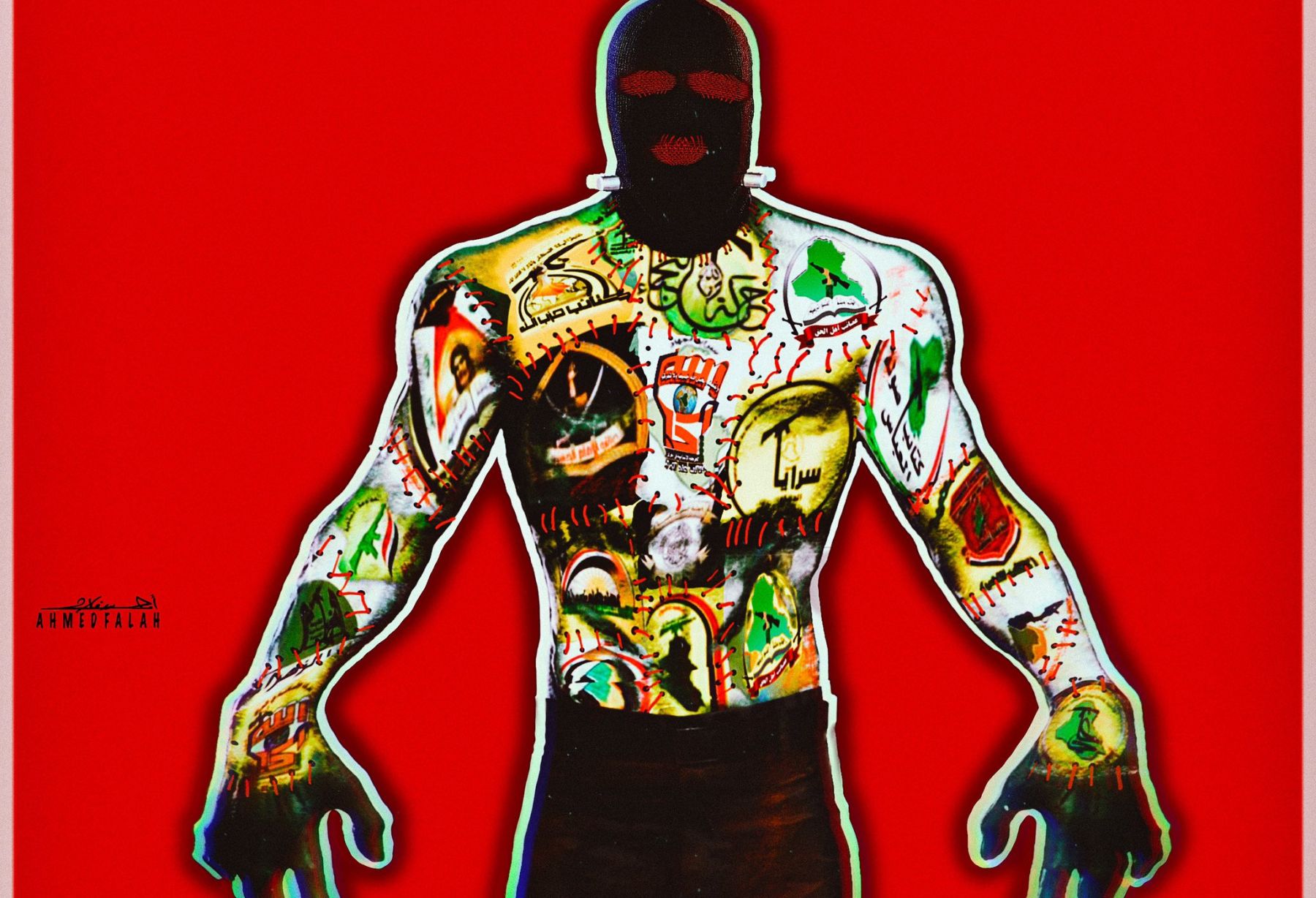 “In Iraq, talk about muhasassa ta’ifiyya is nothing but a lie. In reality, there is party-based muhasassa under the guise of representation. […] The state is the responsibility of all state institutions—the executive, legislative, and presidential bodies—and even civil society. It is an integrative relationship that includes all. Blaming this government is both unfair and duplicitous.” – Mustafa al-Kathemi

In a recent press conference, Iraqi Prime Minister Mustafa al-Kathemi claims to have inherited a flawed governing system, despite emerging from the establishment as former spy chief. He notes that the party-based consociational system functions under the guise of representation, yet he denies the pervasiveness of sectarianism in Iraq. How can one acknowledge a system that politicizes identity without acknowledging discriminating policies pervasive through all levels of government? Politicizing an identity involves policing, criminalizing, and manipulating it to another’s advantage. Sectarianism never emerges out of a vacuum; it results from a process of political, legal, and social conditioning. While discussing the importance of an integrative relationship between state institutions and civil society, Kathemi’s government has been using dated defamation laws to silence critics and limit free speech. Kathemi claims civil society shares responsibility in state-building while spending much of his speech painting himself as a victim of unfair popular criticism and blaming his critics for lack of progress. This is political and sectarian gaslighting at its finest. By making such a claim, he attempts to obfuscate the existence of an ethnosectarian-based state power structure, which makes identity-based discrimination state policy and is designed to alienate civil society from state institutions. In the same press conference, Kathemi briefly addresses the latest scandal involving the Ministry of Education. Examinations were leaked on a large scale, compromising the integrity of the entire educational sector. He notes a few arrests as the solution to a deep-seated problem in the educational system that has existed for years. The connection between the deterioration in the educational system, sectarianism, and the breakdown of state institutions is greater than Kathemi cares to admit. We cannot divorce critical social and political engagement from education, let alone in a society where people are conditioned from a young age to memorize everything they are taught without critical engagement, and with no exposure to critical theories in higher education. Recent interviews with activists and academics in Iraq emphasize that this is a root problem in conversations around desectarianization, and key to state institutions’ control of the masses.

In interviews conducted with activists and academics in Iraq on sectarianism, they agree that there needs to be an integrative relationship between state institutions and civil society but note the first’s failures. Essential to desectarianization, they unanimously agree that identities in Iraq—especially sect-based ones—need to be reconstructed. By suggesting that identity is a social construct developed through social, political, and other interactions, they discuss how identity can be similarly reconstructed through the same means. This aligns perfectly with the literature on desectarianization, which argues that, because of the social construction of sectarianization, it can be deconstructed. To desectarianize Iraqi society, they agree that a robust national identity is crucial, however is grossly lacking. According to them, the Tishreen Movement was a step towards bringing people together, regardless of ethnosectarian identity, and centering their agency in the fight against ethnosectarian consociationalism. However, an activist claims that the Tishreen Movement opened the door to further sectarianism and radicalization, where new identities and labels are used to create schisms in society—labels such as “Joker” and “stooge” to describe anti-establishment activists and Iran loyalists, respectively. When asked how one can help reconstruct a national identity and retell a story of social cohesion and desectarianization, all academics interviewed unanimously promote the social sciences and humanities as significant to the solution. Based on these conversations, the social sciences in Iraq need to be resuscitated as they are currently dated and rooted in only classical theories. Modern and critical theories need to be introduced into the syllabus and students must learn to engage more critically with the texts. All the educators interviewed complained of a system that exhausts both educators and students, keeping them from exploring new methodologies in the classroom. Critical engagement with the status quo would allow youth to address discriminating policies such as ethnosectarianism and societal hiccups around the subject.

For instance, while many Iraqis are cognizant of pervasive sectarianism in both government and society, others treat it as ordinary and non-aberrational, therefore denying its existence as discriminating and harmful. One interviewee asks with frustration, “Do we face our responsibility in sectarianism?” Without acknowledging the prevalence of sectarianism and one’s role in it, it would be difficult to address it. Those who deny Iraqis’ role in sectarian discrimination claim that it is an import imposed on society. While foreign meddling has, indeed, contributed largely to the sectarianization of Iraqi and other societies, locals cannot deny their agency in this process. One interviewee asks why the study of sectarianism in Iraq and the region is dehistoricized and only focuses on the post-2003 context. Accepting Iraqi agency and state institutions’ role in sectarianism in a historicized context forces people to confront their prejudices and acknowledge their responsibility for the sectarianization process. Does sect-based discrimination serve their interests as part of a dominant group, and at what expense? Do they contribute to dangerous stereotypes of whom they consider the “other”? This is especially important considering the Tishreen Movement and the demonization many face for their political leanings and sect-based identities. Moreover, where do minoritized people fit into this conversation, and are they tokenized in political discourse? How do people’s complex identities factor into sectarianization? These very questions demand that desectarianization be approached using Critical Race Theory (CRT).

Critical Race Theory and desectarianization discourse share a common point of departure—deep skepticism and criticism of the mainstream primordialist position in their prospective fields. A primordialist perspective shapes and assesses people’s socially constructed identities, differences, and any arising conflict between them by always elevating one identity-based group over another and reducing identities to invariable traits. Both CRT and desectarianization discourse depart from a mainstream perspective in their fields that denies the active role of systems of prejudice in shaping social and political dynamics on the basis of identity. Both theories lean on the social construction thesis that identity—whether race- or sect-based—is a product of social thought, relations, and storytelling, and can be similarly reconfigured. While CRT rejects the linear narrative of racial progress in the American context, desectarianization discourse rejects the linear narrative that claims departure from and denial of sectarianism in, say, Iraq. Both invite people to confront their prejudices as members of social structures perpetuating identity-based discrimination. Implementing CRT in desectarianization discourse can help expand understandings of identity and its repression in Iraq, most notably complex, ethnosectarian identities. This means approaching sect-based identity as one would do with race-based identity. While there are differences between the two, especially in terms of historical narratives and biological markers, there are similarities between the two in terms of political, social, and legal discrimination, as well as deep social schisms based on identity-based differences. Policing each of these identities has often led to various forms of violence, legal oppression, dehumanizing media portrayals, and national divides around political elections. Approaching sectarianism through a framework adapted from CRT can help reshape research and activism. Among the analytical tools that CRT offers are intersectionality and anti-essentialism, which would help understand how state institutions oppress those who cannot be adequately identified by membership in a single group, such as Fayli Kurds, Sunni Turkomen, Yazidi women, and other minoritized groups. Multidimensionality and anti-subordination are CRT tools that help challenge notions of ordinariness, blindness to, or denial of, identity-based discrimination. Much like “colour-blind” conceptions of equality hinder the redress of identity-based discrimination, sect-blindness conceptions of equality do the same. Despite contextual and other differences between the two, the overlaps between CRT and desectarianization discourse beg for their integration into a new model for the study of sectarianism, both in Iraqi pedagogy and in the research produced outside Iraq.

Introducing CRT to postsecondary students in Iraq can help restore the educational system’s integrity by inviting them to engage critically with social, political, and legal structures. Studying CRT will debunk the common misunderstanding that the law is moral by nature and will invite students to view the world through a broader yet more penetrating lens. By engaging with CRT, students can engage in “discursive dislocation” or the destabilization of hegemonic discourses that are pushed onto them in and outside the classroom. Through such a process, each will learn to be more mindful of their own positionality in the sectarianization and desectarianization process. While CRT has the potential to yield a critical consciousness of one’s positionality in sectarian societies and invites reconsideration and action, it has the potential to do the same to researchers. Although there is not much literature yet on CRT’s implementation outside the American context, and especially in desectarianization discourse, clarity in critical knowledge of social and structural formations can invite researchers of sectarianism to consider their own positionality. Adapting CRT to desectarianization discourse invites us, as researchers, to look inward and acknowledge our own prejudices, personal experiences with sectarianism and/or racism, and examine how we may inadvertently perpetuate Orientalist and sectarian essentialism in our own research. CRT can also help us look at sectarianism beyond a strict Sunni-Shi’i dualism and explore how sect-based discrimination impacts people who do not necessarily identify as either.

Contrary to what Kathemi said in his recent press conference, sectarianism exists in Iraq. Acknowledging a party-based consociational system functioning under the guise of representation should lead to the realization of pervasive sectarianism in government. Indeed, an integrative relationship between state institutions and civil society is crucial to the state-building process and fight against discriminating practices. This process has much to gain from examining the convergences between Critical Race Theory and desectarianization discourse. Moving away from purist views and towards interdisciplinary research, we can gain much by learning from other fields that are adapting CRT to their studies. As Iraq witnesses a dangerous crackdown against civil society and free speech, adopting CRT to sectarianism discourse, adapting it to the Iraqi context, and engaging with it in classrooms and research is more important than ever.

The image, 'militia Frankenstein' is reproduced with the permission of the artist, Ahmed Falah.