Maternity at War: Thoughts on Parenting During Lebanon's Civil War 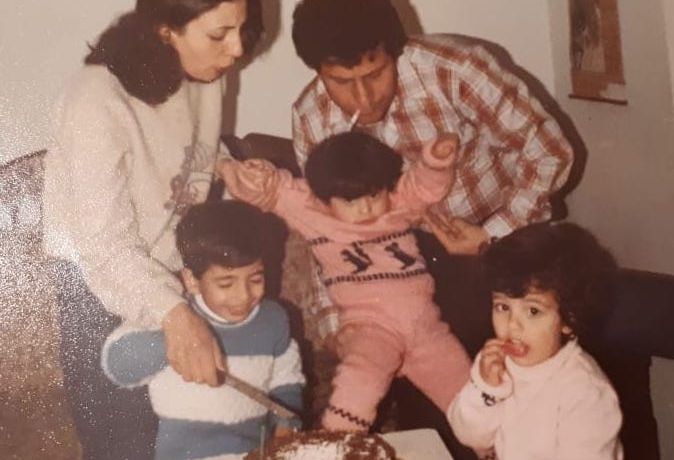 (Photo credit: Rana Haidar, 1986) -- The author celebrating her sister’s birthday with a homemade cake, dressed in pullovers hand-knitted by their mother.

My mother retired last week from her job as a teacher and administrator in a Lebanese public school. She had spent 42 years of her life in a job that is physically, mentally, and emotionally draining. And as she stepped up the platform to receive that ceremonial plaque they honour retirees with, I thought to myself: how did she do it? How did she handle the pressures of a tiresome job on top of parenting during the Lebanese civil war?

My mother is one of thousands of parents who raised a family against the backdrop of the Lebanese civil war (1975-1990). In Lebanon, we have never really paused to take stock of the repercussions of the civil war on those who survived it, especially parents of young children at the time, who were the most vulnerable to its ravages.

I am the mother of a nine-year-old girl. When the going gets tough in Lebanon, as it often does, and I start to panic about my daughter’s future, I often find myself contemplating how my parents’ generation handled the worry and stress of parenthood under life-threatening circumstances. My parents raised three kids within the canvas of war-torn Beirut. We spent much of our childhood rushing from one shelter to the other, living weeks on end in our building’s ground floor, or our bathroom – because, supposedly, it was the safest room in the house. During elementary school, the academic year was cut short twice, and we had to stop going to school because of the ongoing fighting in Beirut.

Back in 1984, when I was in kindergarten, we intensively practiced a dance for the end of year show. My mother had hand-tailored a charming costume for me, with frills and flowers, which I tried on every day at home. But I never got to wear it for the school show, because an intense battle broke out between warring parties in Beirut, and, consequently, schools had to abruptly close for the year.

Now, 30 years later, and living the profound experience of motherhood, I wonder how my parents lived with the helplessness of watching their kids’ hopes, dreams, and little pleasures denied on a daily basis. How did it feel like to be a parent then, living with the constant and real threat of losing a limb or the roof over your children’s head, or worse, your life and theirs?

Research on the psychology of parenting often cites guilt as the basic theme of parenthood. As parents, there is this sneaky inner voice that constantly makes us question whether what we are doing is enough and right. We are always hoping that our parenting is not setting our kids up for a lifetime of psychological difficulties. Did parents, during the war, feel guilty with the knowledge that there were kids outside Lebanon who did not have to ration their food or live without running water and electric power?

“We were constantly in survival mode. Any luxuries or extracurriculars ranked very low on our list of priorities. They were practically nonexistent”, says my mother. But my parents tried, time and again, not to make us see this survival mode. They tried, as parents often do in crises, to produce a façade of normalcy. Despite their attempts, this façade was relentlessly shattered.

In an attempt at normalcy, my siblings and I joined a scouts squad, when we were between 6 and 9 years old. But we only managed to attend one meeting, before the (secular) party that ran the squad got engaged in armed conflict, and all scout activities were naturally placed on the backburner. Another attempt was in the winter of 1989, when we started doing gymnastics in a nearby school. But, then, a major battle broke in March, and we had to leave Beirut and take refuge in my aunt’s house in the mountains for few months until the battle was concluded.

Today, millennial parents provide for their kids the kind of opportunities that we never dreamt of when we were children. Our kids comfortably attend a myriad of cultural and athletic extracurricular activities. By the age of ten, a typical middle-class kid will have traveled on vacation at least once. We bulk buy them clothes, toys, electronics, and everything we can and cannot afford. We want their childhood to be happy and their future to be bright.

For kids born in the 1970s and 1980s, our parents tried their hardest to keep us safe. We were shortchanged, and most of us have not had the chance to develop our talents and interests. But, we were kids, and we were resilient. We were content with the façade that our parents built for us time and again. We even helped rebuild it, after every round of fighting. We were happy to play cards and tell tales in the shelter. However, our parents knew better; they were aware that a happier, more carefree childhood was possible, and there was nothing they could do about it.

Rana Haidar is an Instructor of Communication Skills at the American University of Beirut’s Department of English. She will be relocating this summer to Toronto, Canada, along with her family.